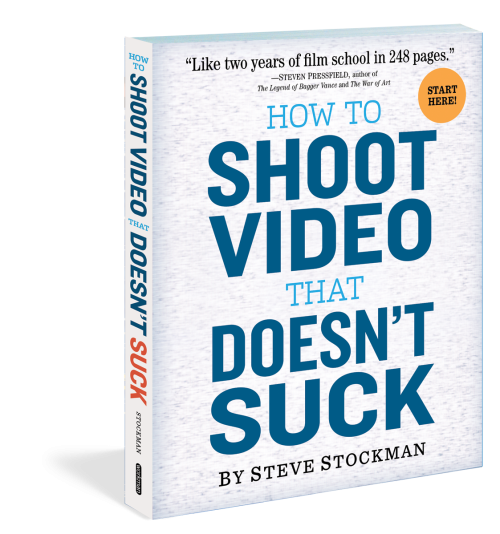 Workman Publishing has just released an updated and revised new edition of How to Shoot Video that Doesn’t Suck!

It’s available now wherever you buy your paper or pixel books. Look to your right for handy links!

This new edition is mostly a touch-up.  It turns out that even if you try not to use terms that might become dated, they sneak in somehow.  And for fans of my Do It Yourself Film Graduate School list of movies that you really must see, there are new additions.

Do I need to run out and get this edition if I already own the book?

Yes! Please buy a dozen. I still have kids in college.

No, not really.  I mean I really do have kids in college, but the changes in the book are minor.

I made an offhand comment in one chapter about shooting video with an iPod Nano. Someone argued on Amazon that you couldn’t shoot video with an iPod Nano. He was totally wrong (the early Nanos were like early iPhones without cell connections and dammit, they had a camera) but I took out the mention anyway because the iPod Nano in any form is ancient history.

I deleted a few other anachronisms (it turns out 6 years is a long time in any tech-related field, even if you’re trying not to write much about video equipment), and rewrote a few paragraphs that begged to be polished. Authors just can’t help themselves sometimes– see pointless Nano argument, above.

Yes. I originally forgot to thank my sister and sister-in-law in the end notes. They read early drafts and had good comments for which I am very grateful. I am hoping they will now allow me back into Thanksgiving dinner. Turns out even a warm turkey leg is cold comfort when you’re sitting on a porch alone in Washington DC, shivering.

So this edition isn’t groundbreaking. Who should buy it?

If you don’t own the book yet, this is a totally up-t0-date, recently-reviewed-and-touched-up edition. You’ll love it. But if you own the book and want another edition for your bookshelf, you’ll probably want to buy the Russian version. Or maybe the audio book, which technically doesn’t go on your bookshelf unless you download it to your ancient iPod Nano and put it there. Did I mention that it had a camera?

8 thoughts on “New Edition of the Book in Stores Now!”