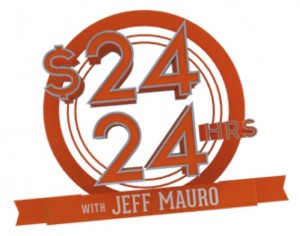 We finished shooting the 4th episode of our new Food Network series $24 in 24 Hours in Cleveland on Thursday.  Last stop:  The Rock and Roll Hall of Fame.

I spent 9 years of my life working in Rock radio, going to 3 or 4 concerts a week.  For me, Almost Famous is a documentary (if you haven’t seen this great Cameron Crowe film, you should).

I was prepared to be all “been there done that” cool about the whole thing.

Then I sat down in the Inductees Video Theater.

I sat through two of the almost 4 HOURS of mind-blowing continuous footage and music celebrating each of the inductees to the Hall from 1986 to 2012. I would have stayed longer, but they were closing the place.

It’s a three-screen, editor’s wet dream of period video.  Songs and artists I hadn’t heard of or thought about in years.  Not the obvious hits, but the deeper roots of modern music.  The stuff that really meant something to the acts that performed them.  The stuff that changed the way all music sounds today.

And with these great montages came a huge rush of emotion.  Partly because I was being assaulted by visceral chunks of a youth I hadn’t returned to in some time—but it was more than that.

I was amazed, overwhelmed by what these incredibly young artists accomplished.  These were 20 year-olds putting themselves on the line to create or alter a wild and risky art form with no guarantee of success—and forcing the birth of a new way of thinking about music.

Yeah, Mick Jagger’s almost 70 now, but when he was 19 he had no idea whether his idea of entertaining would work.  He committed to it– willed it to life—made it happen. Which is the kind of risk every artist takes every day.

Including you when you shoot video.