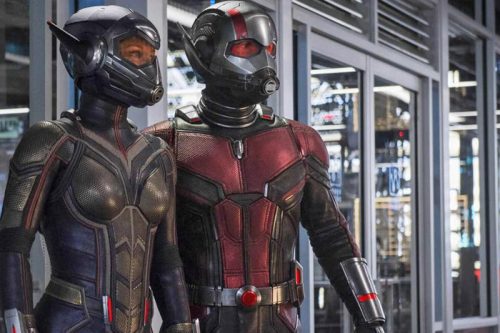 A hero is who your story is about. A mute woman rescuing a monster she loves, a lawyer facing down the bigotry of his 1930s community to save a man’s life, a woman of color who wants to do math for NASA to save a mission– all great heroes. They each take big risks and strong actions. Seeing how that action turns out for them is what pulls us through the story.

Generally speaking, the stronger the hero and the tougher the odds they face, the better the story. Which is why superheroes, who are larger than life by definition, make for exciting stories. But Ant-Man and the Wasp, the sequel to 2015’s charming and imaginative Ant-Man, shows us that even the strongest super-hero gets boring fast if you keep them from making choices and taking action.

In Ant-Man and the Wasp, Paul Rudd’s Ant-Man is about to be released from house arrest and live happily ever after with his adorable daughter. But after a mysterious flashback vision, he’s kidnapped by Michael Douglas and love interest Evangeline Lilly, who hate him for something that happened in a Marvel Movie I missed.

The filmmakers sideline Ant-man from the beginning of the film. Instead of Rudd rushing off to find Douglas and Lilly, the filmmakers have them drive the action by drugging and kidnapping the passive hero. Ant-Man sleeps through it. And in a metaphor for this film’s central problem, when he finally wakes up in the back seat, a car chase is already in progress around him. The filmmakers literally don’t let the hero drive his own plot.

For the rest of the film, Paul Rudd is along for the ride. Douglas and Lilly tell him what his goals are. He gets shown around their lab, rides in their cool shrinking cars, meets with their old frenemies. In one scene he watches the Wasp confront two powerful villains via remote monitor while he sits in the car worrying.  Near the end of the film, he’s used as a passive body for the spirit of Michael Douglas’ wife, Michelle Pfeiffer, to inhabit.

It’s not Ant-Man’s desires that drive the film, it’s Michael Douglas’s. Ant-Man should be worried about violating house arrest, frantic to get back home. But he’s not, because the Wasp team has it all handled. His relationship with the Wasp should be fraught with anger and sexual tension. Instead it’s  just sort of— not a big deal. The filmmakers even gave the climactic Quantum Universe rescue scene to Douglas instead of Rudd. While Douglas gets the girl, Ant-Man battles a villain that he’s barely interacted with before and who doesn’t even hate him.

The result is a nice-enough movie. But once you realize how passive the lead character is you can’t stop noticing it. And you can’t stop wishing that Paul Rudd, a super-charming guy, was really the hero of his movie.

The lesson for the rest of us: Make sure your hero owns their own story. Make the hero’s desires and choices kick off the beginning of the story, let their difficulties motivate the middle, and let your hero’s strengths or weaknesses lead them to the story’s end.

Use Paul Rudd asleep in the passenger seat of a van as your mnemonic image and always let your hero drive. The car and the movie.